Shop for Cancer Bracelets, Awareness Bracelets & Bracelets for Any Occasion 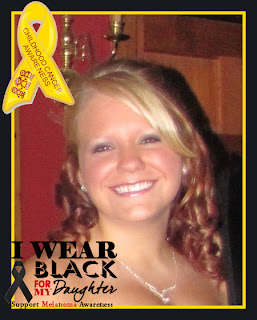 ﻿My daughter, Courtney, was diagnosed with Melanoma Skin Cancer Stage IIC (2C) on May 12, 2011.  It started as a regular mole that she had from the time she was a little girl.  It started growing, bleeding, and it itched.  The tumor was 7 mm deep, ulcerated, invasive, and a high mitotic rate of 9.  The prognosis or 5 year survival rate is 47% for a tumor 4mm or larger, and 30% with a tumor 6 mm or larger, ulcerated and high mitotic rate.

This blog is to help others to be more aware of melanoma as I was not.  I did not even know what it was, how it looks, and how deadly it can be.  If I was educated about it, my daughter would not have it today.

Since we are just beginning our battle, I am still not completely educated, but I will share our experience as we go.  I started doing research on the internet, but found it to be so grim and all it did was make me cry.  As of right now, I am just waiting to hear what the doctors say since I do not know much and we all should not worry needlessly (even though I do still).

Courtney is 16 years old and a Sophmore in high school.  She has beautiful blond hair and gorgeous fair skin.  She lights up a room.  She has a very “sunny” personality and is always making me laugh.  She is very positive (even through her diagnosis), and is very intelligent and has all As and Bs in school.  She will be going to Western University  in Bowling Green, KY when she graduates High School.  She plans on living here, getting a job and attending school full time.  She wants to be a counselor for teens who are troubled.  She has never wanted children in the future, but in the last week has changed her mind and would like children when she is 30 to mid 30s.  She has 2 siblings here at home a brother who is 9, a sister who is 7, and an older sister 21 who lives out of state.

She has not had a lot of exposure to sun growing up as I always put 30+ spf on her, with the exception of this summer and last as she was more into tanning and wanted to look pretty.   I allowed her to go to a sun tanning salon for 3 one month sessions for special occasions, which I completely regret!!  We do not know exactly how she got it or how long she has had it.  The dr said it looks like she has had it for a long time by the size of it.   She has always had a raised mole on her left arm from a little girl.  She always called it her skin cancer kind of as a joke.  I told her it was not skin cancer as I looked up photos and the pics I saw of cancer did not look anything like what she had.  I wish I would have done more research even at that time, but I had absolutely no worries about her having cancer.  She just didn’t.  I should have known that a mole that grows in size is a sign of melanoma, but I didn’t again.  She started picking at it a few months ago.   The mole started to grow at that time and it would bleed when it was hit by accident in gym or against the door or wall.  I asked her if she wanted it removed since it bled constantly from bumps here and there. I tried making an appt with the first doctor, but they could not get her in until June 4, 2011, and her prom was May 14th, so I called another dr.  They got us in on May 6, 2011.  The doctor said that he has never seen anything like that before and he looked to be about 60-70 ish. He only removed the top of it and sent it to the lab to have it biopied.  He told us to call him on Tuesday, May 10th for the results.  At this time, I cancer does not even cross my mind as I just know that it will come back negative.  I call him on Tuesday and he said the results are not yet back as they had to do additional blood smears.  This was the first time I felt any kind of fear... but only slightly.  I said my first prayers that night and waited for Friday to come.  I received a call from him on Thursday, May 12, 2011.  I do not recall the entire conversation as I think I was in shock because I was truly expecting him to say... “everything looks great,” but he did not.  He said she has melanoma and it is active.  He said he works closely with a plastic surgeon and he will have to remove the tumor.  I told him I do not understand, “what is Melanoma?”  He said the tumor is malignant and it is cancer.  I hung up and started doing research immediately as I needed to be educated on this awful cancer when we go to the doctor..  The first thing that comes up is that Melanoma is the deadliest skin cancer.  I almost vomited and called my best friend.  After trying to do a little more research, I decided that I do not need to see or hear anything negative about this and I will just wait to hear from the doctor.  Dr. Hulsey saw us on Friday, May 13th.  He said it was very serious (as all cancer is) and he thinks she has had it for a while.  I told him that it only started growing the last few months bc she was picking it.  He said he will take all the “miracles” he can right about now.  He said the size was 6.2 mm and the tumor was a Level 4 (not stage of cancer, but depth).  I knew this was not good by the research I did. He told me about a few children’s hospitals that specialize in pediatric cancer, and we have chosen to go to St. Jude in Memphis, TN, if needed.   They then called Courtney into the room and he examined her.  She did not have any lumps under her unpits or anywhere on her body, which was great news.  The dr was very good with her.  After he left she asked me if he told me what kind of cancer she had as I did not tell her the day before.  The night before she did her own research and was hoping it was not melanoma.  She also found some terrible statistics on the internet and I told her that we cannot look up anything as it does not apply to her... she agreed.  So I told her the truth .. That she has melanoma.  We cried and I held her.  I told her that we are going to do anything and everything to get rid of this and we felt optimisitic that we will receive the care that she needs.  Dr. Hulsey scheduled a PET scan for Monday, May 16, 2011  at 11:00.  The PET Scan will tell us if the cancer has spread to her organs and/or her lymph nodes.  That night we had so many ups and downs.  She sat in my bed with me and we held hands and cried and talked.  She was very positve all weekend long and had a great time at her prom.  She looked absolutely beautiful.  She said she felt like she was getting married.  I will need to get those photos on my facebook.

Monday, May 16, 2011
Courtney had her PET scan done and she did great.  She has never been sick so she had no idea what an IV felt like.  She said it was nothing... like a bee sting.  They had us sit for 45 mintues while the medicine went into her system.  The test then took about 30 minutes.  The technician told us the results will be in in about 48 hours.  We went to lunch at Red Lobster and had a great day.  At 5:30 the dr’s office called and said her results were in.  That was fast, and it made me worry.  They said they wanted us to come in at 8:30 am the next day.

Tuesday, May 17, 2011
We woke up early to go to the dr office to receive the results of her PET scan.  Before we left that morning, the doctor called and said he didn’t want us to waste a trip to BG and said they may see a spot on her liver and they need to do an ultrasound and MRI of her liver.

Thursday, May 19, 2011
Courtney had the MRI and ultra sound done on her liver at 6:30 am.  We stopped for breakfast and to drop Courtney off at school.  On the way home we received the results of the test.  The doctor said they still cannot tell if it is on her liver and that a PET scan needs to be repeated in 2 weeks, but they cannot wait that long to do surgery.  He said he would call us back today as he wanted to get her registered at St. Jude.  St. Jude called Friday to register her and they were supposed to call me back that day, but they never did.  Now, it is the weekend and we are waiting to hear when she will go to the hospital.  They need to get this terrible cancer out of her body ASAP.
Posted by Courtney's mama at 12:30 PM

Email ThisBlogThis!Share to TwitterShare to FacebookShare to Pinterest
Labels: My beautiful Courtney at 16 years old

My name is Gloria from Senegal, I came in here to confirm Hepatitis B. testimony that I red online some months ago. I red about how Dr. Iyabiye cured one Mr. Henry and I decided to give it a try to see if my sister could be healed or cured too, behold doctor Iyabiye is indeed a sent to help people out of this miserable disease. My sister was dying of hepatitis b her stomach was swollen and complained of pains and weaknesses in her body, I came across iyabiye’s contact online while checking about hepatitis. My sister got cured after she applied his medication for a month. I am here to thank Dr. Iyabiye and to encourage people to reach him for help through: iyabiyehealinghome@gmail.com Call/Whatsapp: +2348072229413

Courtney's mama
Kentucky, United States
My daughter, Courtney, was diagnosed with malignant melanoma skin cancer stage IIC on May 12, 2011. Her tumor was 7 mm deep, ulcerated, invasive, and a high mitotic rate... The prognosis or 5 year survival rate is 47%, but Courtney will not be a statistic as each person is different. We are very lucky that Courtney is being treated at St. Jude with the very best doctors and medicine. She has been treated with 4 weeks of high dose Interferon alfa-2b, and is currently doing 48 weeks of peginterferon alfa-2b as a once weekly shot in her leg. Peginterferon is a research drug which is shown to keep the melanoma from spreading or recurring for an average of 34.8 months. This is important to us because after 3 years of RFS, Courtney's chance of the melanoma coming back or spreading diminishes with each year past the 3rd year... This is Courtney's story as she fights this horrible cancer!